Fuchsia (named after Leonhard Fuchs, a 16th century German botanist) is a genus of over 100 species of shrubs and small trees. Although there are four New Zealand native species (colensoi, excorticata, perscandens and procumbens) and one from Tahiti, the vast bulk of the genus occurs in Central and South America.

Think of fuchsias and chances are the fancy garden hybrids come to mind first. Showy as they are, it is not difficult to see they are related to wild species such as Fuchsia magellanica, Fuchsia denticulata and Fuchsia triphylla.
Some species, however, are less easy to distinguish. Our common native tree fuchsia (Fuchsia excorticata) has fuchsia-like flowers, though it can be hard to see the connection with the garden plants when it is not in bloom. But the likes of Fuchsia arborescens from Central America, with its panicles of tiny flowers, scarcely matches the common idea of a fuchsia.
The most widely grown of New Zealand’s native species is Fuchsia procumbens and it too is quite unlike the garden cultivars. It is a low spreading plant with small rounded leaves and can be very hard to pick as a fuchsia until it flowers. Indeed, my initial experience of the plant was with cultivated specimens and I have to admit that I didn’t immediately recognise wild plants when I first saw them.
This species was discovered in Northland in 1834 by Richard Cunningham. (some authorities call him Robert; in any case he should not be confused with his better known brother Allan.) However, it wasn’t introduced into Europe until 40 years later in 1874. It has at times also been known as Fuchsia prostrata and Fuchsia kirkii.
The species occurs naturally in the north of the North Island down to northern Coromandel, often in coastal areas, and is now endangered in the wild. Though wild specimens can spread to several metres wide, cultivated plants are usually quite compact.
The flowers, which appear from mid to late spring are sometimes hard to see among the dense, sprawling foliage. The blooms are not the usual fuchsia colours – green and yellow, not red and purple – and most unusually, they face upwards rather than being pendulous. The blue pollen-tipped anthers are also very distinctive.
Upward facing flowers are scarcely surprising in a plant that grows so close to the ground. Nevertheless it is a feature that hybridisers have long been trying, with limited success, to breed into garden hybrids.
The real feature, and the reason why Fuchsia procumbens is grown by enthusiasts world-wide, is the berries that follow the flower. All fuchsias bear berries, but none can match the fruit of Fuchsia procumbens. While the bright red berries of wild plants are scarcely larger than redcurrants, cultivated plants may have fruit the size of small plums. The fruit has a grape-or plum-like bloom and is particularly showy because it is carried on top the foliage, not hanging below it. Fuchsia procumbens is a plant that likes to show off its wares.
This little trailing plant makes a superb hanging basket specimen and is very easy to grow. Despite its northerly natural distribution, it tolerates frosts and even withstands some drought. But strangely enough it is one of those New Zealand natives that is better know abroad than at home. British and American growers wouldn’t be without it, but how often do you see a good specimen in a local garden? 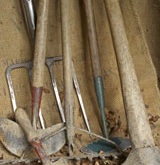