A Tokonoma is a time-honored architectural detail of many older Japanese homes. These alcoves occupy a corner in a room, and often hold a scroll, an ikebana flower arrangement or other artwork. More than a display area, a tokonoma is seen as a sacred space that is not to be invaded, and the seat closest to it is often reserved for the most honored guests.

Ikebana is an important part of such a display. First developed by Chinese monks in the 1500s, its principles were a closely guarded secret for many centuries. When the art arrived in Japan, this method of floral arranging was practiced only by Japanese royalty and samurai families. Much later, it became better known to more people, spreading eventually to the West.

The word itself means “the way of the flower.” Its purpose is to create a harmonious balance between flowers and the environment. Where Western flower arrangements are often a profusion of wide-open blossoms, ikebana’s art is based on the idea that less is more. Arrangements are spare, and emphasize the linear rather than the circular. An arrangement consists of three main parts, each with its own spiritual meaning. The center section is the tallest, and represents Heaven. The second section on one side represents Mankind, and the third section on the opposite side represents Earth.

Proportion is also very important. “Mankind” is designed to be three-quarters the height of Heaven, and “Earth” is meant to be three-quarters the size of Mankind. Thus, a beautiful proportion of descending height is created, bringing the spiritual into balance with the corporeal and human worlds. After the three main stems are established in their proper proportion and place, a few carefully selected, smaller stems may be added, but it is always a good idea to add as little as possible so as not to overwhelm the eye. Also of great importance is the choice of container as an added artistic element. Containers may be wide and shallow, such as the type used in bonsai arrangements. They may also be tall and slender. The base of the container should hold a heavy piece of metal with closely-set prongs called a kenzan, to hold the stems in place. 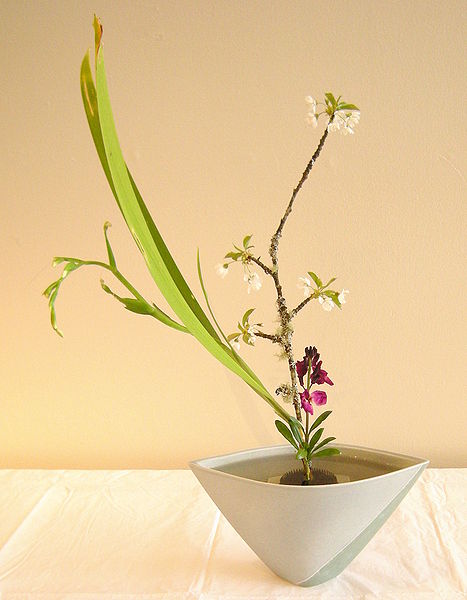 There are three main styles of ikebana: Rikka, which is upright and vertical, Nageire, which has a natural form that can be upright or cascading, and the lower Moribana, which means “piled flowers.”

Much like the art of bonsai, this type of floral arranging can take many enjoyable, meditative hours. The life of the arrangement can be extended by various methods such as charring the ends of stems, crushing them and adding salt, vinegar or even rubbing alcohol, however, it is best to research the best method for each particular type of flower before applying one of these methods.

To learn “the way of the flower,” begin simply. There is no limit to the type of arrangements that can be made if the basic philosophy of heaven, mankind and earth in proportion is observed.