For centuries Japanese poets have been influenced by the beauty, magnitude and mysterious quality of gardens from their country. Their is an evocative yet subtle quality to Japanese gardens, that are usually depicted in an ideal landscape with a very stylized aesthetic and a precise perspective. Both in terms of the form and beauty, one can see the influence of these gardens on poets from Japan.

In general, nature has been a profound influence on Japanese poetry. Particularly, the rich and delicate landscape of Japan mixed with their ever changing climate. However, in a Japanese garden, nature is depicted in a highly stylized way without the intention of being artificial. On the contrary, a Japanese garden is supposed to appear real and an authentic landscape, as if it has grown there, organically on its own. The Zen monk, Kokan Shiren wrote about Japanese gardens. Most of Shiren’s writing depicted the connection and relationship man had with nature and the landscape. Further, Shiren was interested in how the garden could actually purify or cleanse the senses and soul of a man. So, in this sense, the effect the garden produced on this poet was of a spiritual quality which evokes a more imaginative and mysterious quality of influence.

One form of poetry that has been linked to the work of gardens is Haiku. Haiku’s specific structural form and precise historical context makes it an easy target for comparison with the Japanese garden. Many Japanese poets have used the influence of Japanese gardens within the realm of the poetic form of the Haiku. The 20th Century Japanese Haiku poet, Shuoshi Mizuhara was preoccupied with gardens and their effects to man. It is obvious how much Japanese gardens played a role in the poetical works of the past few centuries. Like sculpture or painting, Japanese gardens became a type of natural artwork that become an influential source of inspiration for many poets, architects, musicians, and teachers.

Japanese gardens not only influenced the poets of Japan but poets from other countries as well. The influence was international and widespread. It has also dominated in the works of architecture and other art forms both in Western and Asian cultures. Above all, Japanese garden making is a tradition built on centuries of knowledge and wisdom that has been passed down from generation to generation, very much like Japanese poetry. 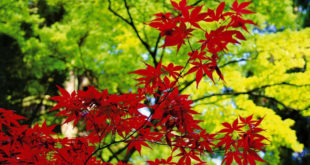