Life and works of Dan Robinson 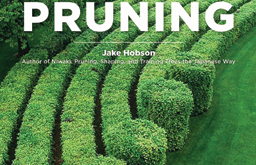 The Art of Creative Pruning 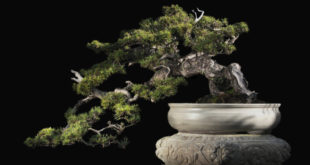 Two months ago I was asked to review a book ‘Gnarly Branches, Ancient Trees’ about the life and works of a great American Bonsai pioneer, ‘Dan Robinson’. Normally I can write copy fairly quickly, but this book stumped me (excuse the pun).

Dan Robinson is not just a Bonsai master, he is in the world of Bonsai an icon. A man who introduced many new techniques in styling and collecting Yamadori. He is also known for moving from eastern natural styling to the artistic form of tree manipulation, to put it bluntly. It would not be my style of Bonsai as I am a tree hugger I prefer the natural flow of a tree gently pruned into a desired shape, but this review is not about my opinion of modern Bonsai art, it is about a man, a book, that paints a portrait of an artist.
With this book you will find styling techniques and a biography that leads you, the reader, on a journey as a man as a tree. It is clever, different and not like any other Bonsai book that I have read. Not that I read many books from page one to index. Normally I am the hands on dude who uses a book as a reference tool so reading this was initially difficult.
The book starts out with a forward by Walter Pall, that describes the man who is seen by some of his fellow growers, as just another bonsai stylist and not a bonsai artist. Pretty unfair. The lead image shows how close Walter Pall and Dan Robinson are and the forward describes this in detail.

“In my eyes, Dan Robinson is a truly American bonsai artist. … His art is authentic, coming from nature, American nature…” by Walter Pall

Elandan Gardens, Kitsop peninsula, Washington state. You know the place, Washington state  were ‘Sleepless in Seattle’ happened. I diverse! Elandan Gardens is the home of Don and Diana Robinson. It is described as a tranquil place beside a lake surrounded by embankments that create that perfect place were an artist can think without distraction. It is close to were Dan as a child saw this tree, “A tree I’ve never seen before”.
We have all seen that tree, our own tree that inspires and creates that spark as it did with Dan. This chapter tells the story of Dan from an early childhood were he was moulded, shaped into what he is now. It is a literary description that gives you an introduction to what is behind Dan Robinson, his childhood, his family and friends. From a kid in short pants back in 42′, describing his pondering touches, a sort of early love affair with trees. You could say a very early tree hugger.
Dan in some ways is anti-establishment (my kind of dude). In the ‘Demo Years’ he describes many techniques including, how Yamadori are collected. One such technique credited to him by George Heffilinger is the ‘Papoose Wrap’. This technique increased the survival rate of Yamadori by a large percentage. Dan, being the gentleman, says that this technique originates from Vickie and Bruce Valentine, who used plastic bags to store their fresh Yamadori, as in growing boxes they would surely die. Dan describes how he uses chicken wire and plastic sheeting to wrap the root structure. It is an interesting chapter that has many stories on famous names in Bonsai and the journey. 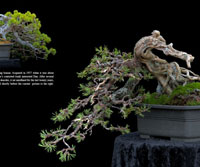 On one such journey, Dan found that now famous celebrity tree ‘Jackie’, a tree named after ‘Jackie’s Gleason Dancing’. It took Dan four years to train Jackie before ‘he’ was presented to the American National Forestry Service in 1980. Jackie is a Ponderosa Pine or Western Yellow Pine and he is approximately 150 years old. Jackie is now permanently dancing at the American National Bonsai Foundation.
This book goes through the many stages of Dan’s life written in some ways like a ‘Mills and Boon’ novel, describing the love affair with trees and how one man has dedicated his life to his art form. Their are many great Bonsai artists, but not many who have achieved so much as Dan. To these non-Bonsai artisthobbyist this book ‘Gnarly Branches, Ancient Trees’ would make a great read and occasional book. Yes you can put it on your coffee table and all who read it will enjoy, but to the Bonsai budding artist it is inspirational, full of stories and technique. In someways it does tell you how one man has tried to break the mould and carve a ‘truly American bonsai’.
.
Gnarly Branches, Ancient Trees: The Life and Works of Dan Robinson – Bonsai Pioneer
by Will Hiltz
ISBN: 978-0-615-37850-3
Nara Press 2010, 292pp, Hardcover with dust jacket.
$49.59
Photographed published with kind permission from Jason Gamby.

Anyone interested in ordering the book may do so through the Elandan Gardens web site.

Disclosure: I agreed to write this review and received the book free of charge. Anything I write is honest and upfront.

Previous Beauties of Spring
Next Aronia, A new commercial berry crop for America