A 表具師 Hyougushi is an artisan that works in paper, textiles, glue, and wood to create a variety of products. The two primary products made by a Hyougushi associated with bonsai display, are 掛け軸 kakejiku (hanging wall scrolls) and 屏風 byoubu (folding screens/partitions). The reader will be introduced to the methodology of judging scroll formality, how formality is related to different scroll designs, and some rules of thumb regarding the cloths and the pictures themselves.
The principles that the Hyougushi uses to design the frame for the scroll is entirely different from the principles used to display the scroll with a bonsai or viewing stone. When I first started working professionally as a Hyougushi, I understood little of the needs of the bonsai artist. It led me to learn new ideas, methodologies and ways of thinking to understand how to make scrolls more suited to the bonsaiist’s tastes.

The system of display that I have begun to study is called 雅道Gaddou or the “Way of Elegance/Refinement”. This display style focuses on the display of shohin bonsai and utilizes a very simple system of determining the formality of the display based upon every element. This article will only focus on the elements of the scroll in determining its use for a display. Additionally, the reader should realize that there are many more different types of scroll styles. Only the most basic elements of the scrolls will be presented to provide the bonsai artist with the ability to recognize the level of formality of the scroll. By recognizing these elements, decisions to select an appropriate scroll for a display may then be made with confidence.
The crux of understanding about the kakejiku is the ability to verify the level of formality of the scroll. Some basic attributes applied or omitted will resolve whether the kakejiku is ranked as 真Shin (formal), 行 Gyou (semi-formal) or 草 Sou (informal). This classification method also applies to the tree varieties, styling, pots, tables, slabs, calligraphy , accent pieces et.al.

The following are the most formal , Shin style scrolls. The most striking feature is the intermediate paper, called 台紙貼りDaishihari used as a buffer between the artwork and the cloths. 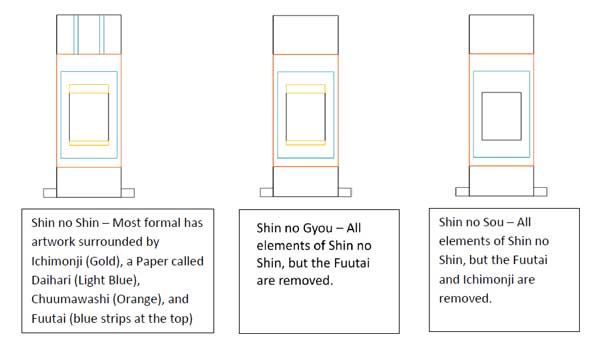 What type of scroll is pictured in Figure 1 to the left? This is the Shin no Shin style scroll, and is often reserved for Buddhism and religion related theme. Such religious themed works are not the most appropriate motifs to use for display.

In Figure 1 it is hard to see the picture, but it is quite clear that this is not religious themed artwork. This display was critiqued by my display Sensei and Figure 2 shows that the scroll being reduced in width would have produced a simplified display. In this case, the shin no shin is transformed into a shin no gyou scroll.

By removing the fuutai, the entire display becomes less busy and pushes the eye more to the bonsai. Additionally, by removing the 草者 kusamono there is no competition in the height between the tree and the accent. Replacing it with the 茅葺 Kayabuki, which is an old thatched roof Japanese house, correctly provides the depth (space) for this size of 地板 jiita used in the display. 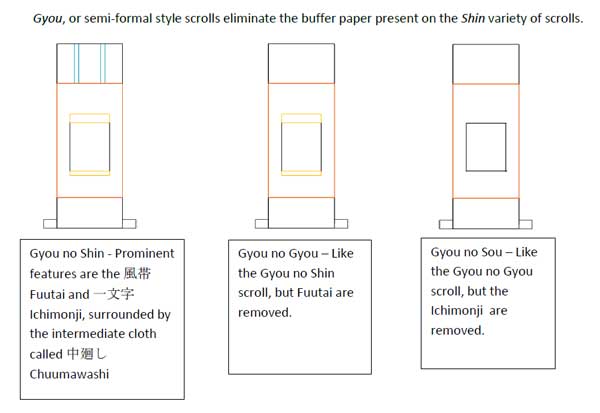 [hr]
What is the scroll type in figure three to the right? The scroll is an excellent example of using good whitespace, and also has good color combinations of gold on light brown with khaki.Both of these points will be discussed in more detail below. One thing to consider when displaying this type of scroll is to properly straighten out the fuutai. In this case the fuutai are slightly bent and affect the display negatively. 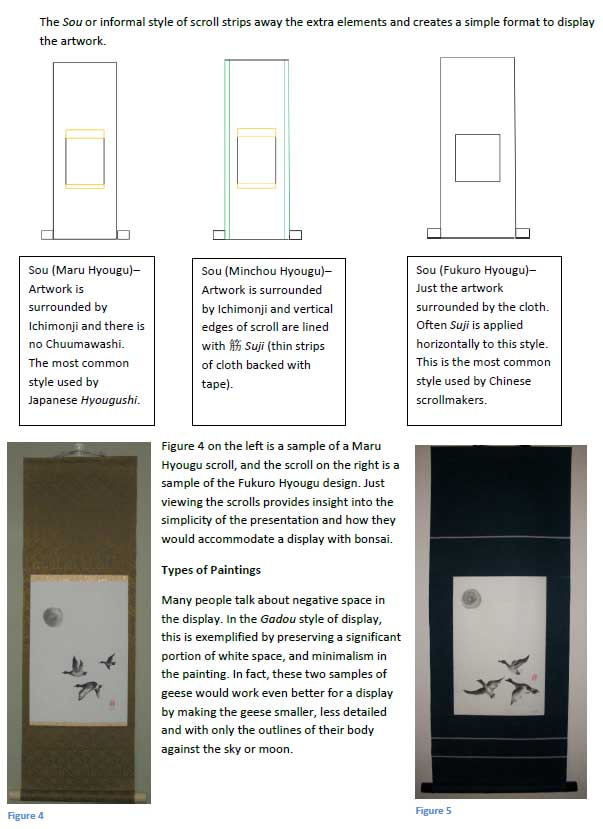 The scroll to the right in Figure 6, is an example of a Gyou no Shin scroll. In this case the Fuutai are replaced with suji (the four vertical black lines running along the Ten or top of the scroll). Matching the season to the image on the scroll is very important. Appropriate images will not be discussed in this article, but the Magpie is often associated with a fall display. Based upon the information above though, this is too strong an image to be paired with a bonsai. It could become the focal point of the display rather than the bonsai.

When placing a scroll which utilizes calligraphy, it is recommended to hang one written in the 草書Sousho (Full Cursive) or かな Kana styles. If one looks closely, the character for 草 Sou is the same as that for the informal scroll style. The full cursive style is the most informal writing style, and is appropriate for display with a bonsai, because it is softer, less bold and does not compete for the viewer’s attention. The example in Figure 7 is a sample of Sousho writing and reads, 清風万里秋Seifuu Banri no Aki. This is a poem and means the Pure Wind is the Completion of Autumn. 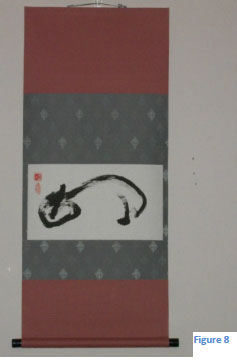 One additional note is that one character scrolls are discouraged to use with bonsai because they compete for the viewer’s attention, but often do work well with certain types of 水石 suiseki. The scroll labeled Figure 8 is actually not a character, but is an abstract painting of the Ru Yi (Chinese) or 如李Nyoi (Japanese) scepter. It was a scepter held by the Chinese Emperor and would grant a requestor their wish by using the scepter. Poems and Sutra’s like the one outlined in Figure 7 are better suited to display with a bonsai, particularly those that expound on nature or the seasons.
[hr]

The correct term for the cloth mounted into a wall scroll is Kireji. This is the last point to consider when selecting a scroll for a display. The Gadou style of display encourages the use of very light earth tones for the cloth color. The justification of this is that these colors are soft, neutral and do not compete with the bonsai or main display piece. Khaki’s, tans, golds, grays, light greens, and light browns are the most desirable colors. The above Crow scroll in Figure 6 is a good example of using a light brown and tan. It can be further pointed out that colors can go with the seasons. The green with gold ivy arabesque with the khaki cloth in Figure 7 was designed specifically to represent fall colors that would likely be seen during the Autumn season. The last scroll in Figure 9, is a spring scroll written in Semi-cursive style and reads梨花一枝春 Rikka Isshi no Haru. This is a spring poem that states the blossoms on one branch of the Nashi (pear) tree signals spring. In this case, the scroll cloth colors of the light green with a moss design and a celadon/teal cloth were used to represent colors related to spring, especially young growth of the flower buds.

With these ideas in mind, it is hoped that the bonsai artist can be more confident to look for certain characteristics associated with scrolls that will enable them to select or design something that will complement their tree and add value to the entire display. If the reader has questions, please e-mail to [email protected]

[message_box]No Portion of this article may be copied, distributed, or disseminated without the express written consent of Custom Japanese Calligraphy and Jonathan Maples.[/message_box] [hr]

From Bonsai: Writers comments and statements in their articles are the subjective opinions of the writer.

Previous Which bonsai species to start with?
Next The Art of Creative Pruning