Zen Gardens, Imagination in the Making 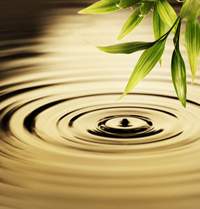 By their very nature Zen gardens encourage you to use your imagination.  Using carefully placed rocks and stones and open spaces filled with sand or gravel these gardens tend to capture the eye and the mind and hold both. Soon one can see the waves undulating in the sand ponds as they push around the rock islands that break their flow. The carefully placed rocks along the shoreline become craggy mountain ranges. Perhaps a bit of moss adds a hint of color and the impression of a hidden valley between those ranges. As you sit deep in thought and relaxed, you realize the garden has indeed captured you.

Zen gardens are done in the Japanese dry gardening style of Karesansui. It was developed in the 13th century by a Japanese priest in Kyoto, the site of one of the world’s most famous Zen meditative gardens. Created over 500 years ago, the Zen garden at the Ryoan-ji Temple is one of the most visited sites in Japan. It contains no plants at all within its 30 metre by 10 metre design. Fifteen rocks are cleverly arranged on a bed of gravel and sand in such a fashion that one can only see fourteen of them at one time. 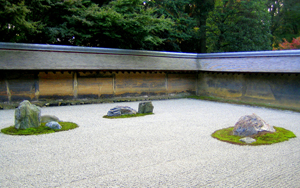 Kyoto is also home to Nanzenji, a Zen temple located at the foot of the city’s eastern hills. It is the head temple for the Rinzai sect’s Nanzenji Zen Buddhism school of thought and is famous not only for its contemplative Zen garden but for its artwork and rich history that dates back to 1291. The Seiryo-den is the main building, where hand painted sliding doors, called fusuma, open to the rock garden. The entrance gate, called the Sanmon, was completed in 1628.

Zen gardens have found their way to other parts of the world as well. In Portland, Oregon, sister city to Sapporo, Japan, the popular Japanese Gardens have included a Zen garden in their design. The creator, Professor Takuma Tono based his layout on a 2,000 year old legend that tells of Buddha saving a starving tiger and cubs that were trapped in a ravine. The expanse of combed gravel is accented by four smaller stones and one upright, all covered with a patina of moss after standing for fifty years.

Zen gardens may one day invite contemplation on the moon, or beyond. The National Space Society held a design contest for lunar space station layouts. Artist Ayako Ono from Japan entered her “Lunar Zen Garden” painting. It features a lunar layout with several domed buildings, solar panels and all else you would expect to find in a space colony. What was not expected was the groomed circles around the domed buildings and strategically placed rocks that seem to have no other function than to capture the imagination. Of course on the moon, limiting your gardening materials to rocks, sands and gravels isn’t much of an issue.

Why not try to sculpt your own Japanese Garden or create a Japanese Water Garden.

Ryoan-ji Temple, The Temple of the Peaceful Dragon.

Japanese Gardens have been a treasured art form in Japan for centuries, and are very …